At the dawn of the 20th century science did not enjoy a high status in Rotterdam. A few ‘harbour barons’, however, noticed the Dutch economy was growing and, with it, complexifying. They expected persons who understood the economy on a deeper level to attain better positions, faster; this was something they wished to bestow upon their sons. Thus the importance of scientifically-underpinned knowledge for futureproof careers was evident to them. They themselves had acquired knowledge through years of experience in business, but they thought the learning process could happen much more effectively. Economics, though, was not yet taught as an independent subject in the Netherlands (even if it was elsewhere in Europe and America) and so there was no comparable school in the country. On account of lacking interest from the people in Rotterdam for creating such an academy, the harbour barons were dependent on themselves and a couple of like-minded business owners to create and support the school.

After a couple of months of preparation, on the 29th of April 1913, the ‘Vereeniging tot Oprichting eener Nederlandsche Handels-Hoogeschool’ (‘Association for the Establishment of a Dutch Business University’) was founded. This association encompassed educational functions as well as the financial functions of the trust fund to maintain the school. The educational institute was officially founded on 8th of November 1913, in what used to be the Doelen. The launching capital was over 140000 guilders. The first lecture was held two days later. 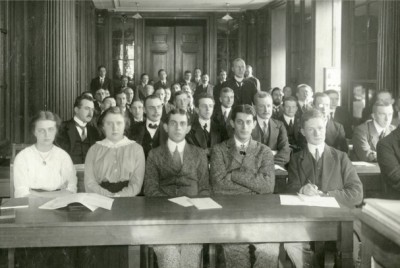 The founding of other universities with a similar focus during the 20’s meant competition in the education arena. Especially Amsterdam and Tilburg grew to become worthy rivals. This external pressure resulted in additional efforts from the Business University in Rotterdam to improve its education. Critical reflection paved the way for an extended curriculum, which gave the University a more scientific footing.

On the 27th of February 1926 a group of former students commenced the ‘Nederlandsch Instituut van Doctorandi in de Handelswetenschap’ (‘Dutch Institute for Doctorates in Business Science’) for alumni of the Business University. A little over a year later, 12 March 1927, the association was made official by setting up its statutes. The goal of the association was to support the interests of her members however legally possible, as well as to further business science. One of the core aims was to strengthen bonds between alumni. Decades later, this association would become the Erasmus Alumni Association.

The club funded and published its own quarterly magazine, which they intended to continue for as long as there was interest in business science from within the club and from beyond. The club also housed a collection of relevant literature, which members could borrow for free. Book discussions were held at a later point. This way, the association endeavoured to keep members interested and up-to-date, even if business science was no longer part of their daily lives.

In 1939 the university was awarded ‘scientific status’, meaning it was eligible for financial support from the government. Her name was changed to ‘Nederlansche Economische Hoogeschool’ (‘Dutch Economic University’). Over time, as Dutch language spelling changed, the name followed suit. In 1956, the association split into two entities, each of which would focus on one of two main tasks: education and finance. Education was to be sustained by the university, while financial tasks, intended to ultimately support the university, were handed to the newly formed ‘Vereniging tot bevordering van de belangen der Nederlanse Economische Hogeschool’ (‘Association for furthering the interests of the Dutch Economic University’). This was the clearest form of the Trust Fund.

The Erasmus University Rotterdam, as it exists today, was born the 1st of February 1973. It was a fusion of the Dutch Economic University (which had been extended 10 years prior with a faculty for social sciences and one for law) and the 5 year old Medical Faculty Rotterdam. The Trust Fund contributed 1,5 million guilders for its establishment. The two funds (one existed for the previous medical faculty) fused in 1977, although a ‘Trust Fund’ remained in existence separately for its traditional rights to nominate professors. These rights were brought under the fused Trust Fund in 1991, which was given the name ‘Association Trust Fund Erasmus University Rotterdam’. In 2005 this association fused with another trust fund that had existed since 1920 to support underprivileged but promising students. Its goals were assimilated in the association.